Cookie preferences
This website uses cookies, which are necessary for the technical operation of the website and are always set. Other cookies, which increase the comfort when using this website, are used for direct advertising or to facilitate interaction with other websites and social networks, are only set with your consent.
Configuration
Technically required
These cookies are necessary for the basic functions of the shop.
"Allow all cookies" cookie
"Decline all cookies" cookie
CSRF token
Cookie preferences
Currency change
Customer-specific caching
Individual prices
PayPal payments
Selected shop
Session
Comfort functions
These cookies are used to make the shopping experience even more appealing, for example for the recognition of the visitor.
Note
Statistics & Tracking
Affiliate program
Track device being used
Categories
Information

A curiosity from the Antilles islands evolves into the sailor‘s favourite bed. The hammock is hygienic and lightweight - and even protects from seasickness.

“Their beds and covers are like nets made of cotton,” Columbus wrote into his logbook on October 17th in 1492. Shortly after that he notes down the word for this peculiar “sleeping net”: Hamaca, a word coming from the Taíno language, the former residents of the Antilles. The most famous wrong-way driver might have even rested that night in one of those nets. However, the next morning turned into an awakening moment. Because here, at the doors of the New World, the Christian seafaring finally rose from the dirt as Columbus’ discovery transferred the hammock into the sailor’s bed. For a very long time, sailors were lying on sacks filled with leaves, on piles of straw or in rare cases on a mattress made of horsehair and all of those started to foul after a few days. Sheets only hid the worst and the terrible smell couldn’t be covered at all. Germs turned those sleeping quarters into breeding places for the worst illnesses. Even the bare planks turned out to be hideously dangerous to sleep on.

Any living provisions the ship would carry were kept in the same quarters as the sailors even long after the era of Columbus. On a swaying ship those sailors sleeping on the planks would fall off them and graze their bodies on the faeces-infested timber floor.

“The tobacco is wet and my bed is a sewer,” a disgruntled sailor once wrote home. Josef Köpf hence wrote that the discovery of the hammock was a break-through. The German owns a hammock manufacturing business in Brazil and knows the history of the hammock inside out. It was not only saving the sailors from laying in dirt and faeces. “The free-swinging hammock will allow a saver and calmer sleep as it will follow the ship’s motion and swaying.”

This definitely sounds revolutionary, as this would mean the cure of one dreaded pain: Seasickness. The doctor Gerhard Boecken from the Naval Medical Institute in Kiel recommends, “If possible, one should sleep in a hammock that will equalise the rolling of the ship.” Columbus’ inventory belongs into any board apothecary. Köpf’s book “The hammock” only briefly touches seafaring in one chapter, though. The “floating bed” was an invention of Mid- and South American landlubbers. Early Indians even slept in them, travelled with them, had their children in them, hang out, died, and were buried with them. There are no precise data to be found and a model that dates from pre-Columbian times was not discovered due to quick decomposition of the natural material in tropical climates. However, there are estimates that suggest that Mid-American settlement took place 30,000 years ago and the first Indians were fighting their way through the Amazonian and Orinoco jungle approximately 20,000 BC.

Ethnologist and textile researcher Annemarie Seiler-Baldinger says that it isn’t unlikely that those Indians would have brought hammocks in their luggage. There are a lot of patterns and weaving techniques today that would suggest a long tradition coming from that area. The hammock is the cradle of humankind. The fabric is was made of liana, agave, palmtree leaves, and later cotton. Colder regions like Northern Columbia would use leather and animal hair. Columbus and Amerigo Vespucci quickly brought back this new jungle curiosity to Europe where the nobility had a first look at them at exotic parties. Half a century later the hammock suffers the same fate as later the simple potato does – which also came from the same area originally – and its origin is all but forgotten. When Heinrich II holds a Brazilian celebration at court, Michel de Montaigne writes surprised that “the hammock looks exactly like the one we have on our ships” – as if it had been an invention of the Old World.

At the end of the 16th century the sailors of the Elizabethan Navy was swaying per decree in “Brazilian beds.” Soon after, the whole of the European fleet was taking their naps in those braided beds. Apart from its hygienic advantages, the space saving effect let to the breakthrough of the hammocks. The airspace underdeck was seized, if not in a peculiar manner at times. Charles Darwin spent five years in a hammock at night, stretched across and above his desk as otherwise there was no room between books, shelves and instruments. He wasn’t particularly fond of this sleeping position for years, but he knew that only the strongest and most adapted would survive any situation.

Commercial sailors always packed their own hammock along with a bottle and tools. The early hammocks didn’t take up more space than a bottle of rum. They were made of sailcloth later and the sailors would carry them in handmade sacks. There are reports that the bodies of sailors diseased at sea were sewn into their hammocks – with the last stitch going straight through the nose – and then dropped into the ocean. However, this was more of an exception. Usually the diseased was sewn into sailcloth or an officer might have been buried in the flag of his home country.

Every night the hammocks would be set up either in one long row or on top of each other. The first few nights were never without complications. “We, who weren’t accustomed to the life on board, were a bit uneasy and the first mishap happened when I was attempting to climb into my hammock at night and fell straight out again. Everything has to be learned and I am glad that I wasn’t the first person who had this happen,” sailor Paul Roesler wrote in his diary in 1878 when he was on his way to the South Sea with the Emperor’s Navy.

The hammocks were stuffed back into their sacks or chests for daily life on the ship. Sometimes they were also placed straight into the lifeboats: In the mid 19th century the German Navy rolled all hammocks, pillows and covers into one big bulk for a morning’s hammock muster. “Following our corporal’s advise, I was able to roll everything into one nice “sausage,” Eberhard Schilling writes about his early time at Sea. The idea was that a properly made “water sausage” would act as a floatation device for a castaway and could float for up to seven hours.

The captain started his career on the sailship “Gorch Fock” in 1939. The same packing technique is still used on this particular training ship of the German Navy. They don’t serve as life saving appliances anymore, though.

And like this, no one would have believed that the hammock only made it into seafaring thanks to Columbus.

The hammock was developed in Pre-Columbian Latin America and continues to be produced widely throughout the region, including among the Urarina of the Peruvian Amazon. Though it is unknown who invented the hammock, many maintain that it was a device created out of tradition and need. The English language derivation of hammock and various European equivalents is borrowed from the Spanish hamaca or hamac around 1700, in turn taken from a Taíno culture Arawakan word (Haiti) meaning "fish net".

Hammocks were first introduced in Europe by Christopher Columbus when he brought many hammocks back to Spain from islands in the present day Bahamas.

One of the reasons that hammocks grew in popularity in the New World was because of their ability to provide safety. By being suspended, sleepers were better protected from snakes and other harmful creatures. It also allowed people to avoid water, dirt, and other unsanitary conditions that existed in the early New World.

They were not part of Classic era Maya civilization; they were said to have arrived in the Yucatán from the Caribbean fewer than two centuries before the Spanish conquest. They are made of various materials (including palm-based in western Amazonia), and the quality depends greatly on the thread and the number of threads used.

Mayan hammocks are made on a loom and are hand woven by men, women and children. Hammocks are so symbolically and culturally important for the Yucatecans that even the most humble of homes have hammock hooks in the walls; in rural El Salvador, a family home may have multiple hammocks strung across the main room, for use as seating, as beds, or as sleep-swings for infants.

The earliest hammocks were woven out of bark from a Hamack tree, and later this material was replaced by Sisal plant because it was more abundant.

Hammocks have also traditionally been used by sailors on commercial sailing ships and naval vessels. A hammock moves in concert with the motion of the vessel, so the sleeper is not at a risk of being thrown onto the floor during swells or rough seas. Prior to this, sailors would often get injured and sometimes even killed as they fell off of their beds. As well, hammocks do not take up as much space in the vessel as bunks. The sides of traditional hammocks wrap around the sleeper like a cocoon and make an inadvertent fall virtually impossible. Also, many sailors became so accustomed to this way of sleeping that they brought their hammocks ashore and they became an item of leisure.

Hammocks are very popular in the Brazilian northeast region, but not only as sleeping devices: in the poorest areas of the sertão, if there is not a cemetery in a settlement, hammocks may be used to carry the dead to a locale where there is one; also, they frequently serve as a low-cost alternative to coffins. This custom inspired Candido Portinari's 1944 painting Enterro na Rede ("burial in the hammock"). 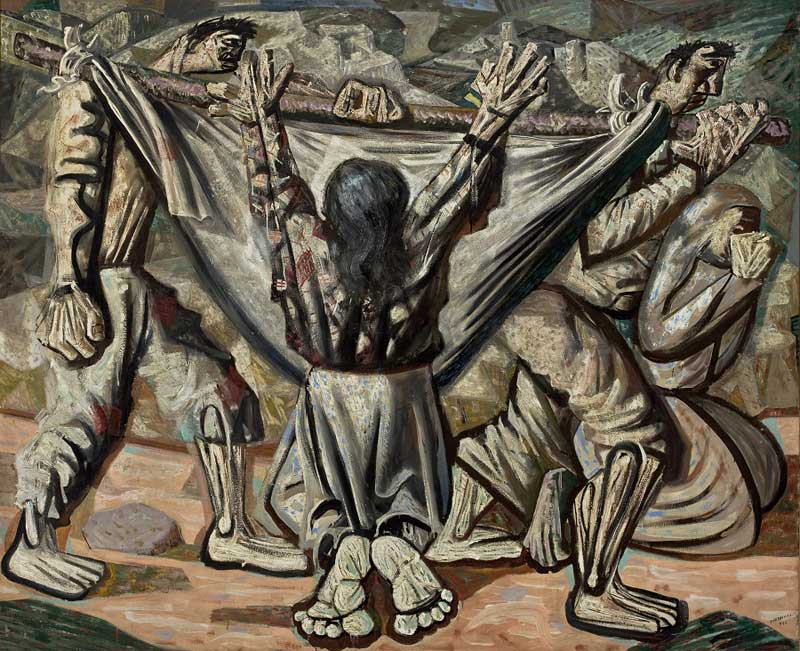 Viewed
This website uses cookies, which are necessary for the technical operation of the website and are always set. Other cookies, which increase the usability of this website, serve for direct advertising or simplify interaction with other websites and social networks, will only be used with your consent. More information
Decline Configure