Cookie preferences
This website uses cookies, which are necessary for the technical operation of the website and are always set. Other cookies, which increase the comfort when using this website, are used for direct advertising or to facilitate interaction with other websites and social networks, are only set with your consent.
Configuration
Technically required
These cookies are necessary for the basic functions of the shop.
"Allow all cookies" cookie
"Decline all cookies" cookie
CSRF token
Cookie preferences
Currency change
Customer-specific caching
Individual prices
PayPal payments
Selected shop
Session
Comfort functions
These cookies are used to make the shopping experience even more appealing, for example for the recognition of the visitor.
Note
Statistics & Tracking
Affiliate program
Track device being used
Categories
Information

The La Siesta GmbH has specialised in the development, marketing and distribution of hammocks and has its headquarters in Jugenheim, Germany.  It was founded by Dorothee and Alexander Grisar in 1991, and  is now managed by their sons.

They see hammocks as what they have always been: a South American national treasure. People from Colombia, Brazil or Mexico have not only used this cultural asset on a daily basis, they have continually developed and refined their hammocks through various stitching and patterns. For many South Americans, their hammock is the most typical – and decorative – expression of their culture and way of life. By producing and exporting hammocks, we thus bring a hint of Latin American lifestyle to Europe.

Their suppliers are among the best hammock manufacturers in their respective countries. In the many years that they have worked together, they have gained the respect and admiration of their partners in Colombia, Brazil, Mexico and India. Together, they work on the continued development of hammocks, hammock chairs and suspension systems.  They hope to give this versatile and decorative commodity the same status in Europe and the United States that it has had for many centuries in South America. For many, it is not only a favourite part of everyday life, but also necessary travel companion.

Fairness is a main focus point in working with ther suppliers. This ensures a dignified existence for everybody involved. By doing so, they comply with international social and environmental standards and use sustainably cultivated raw materials such as organic cotton and FSC® certified wood 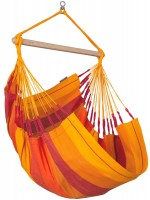 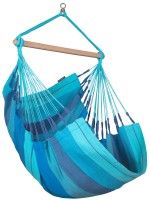 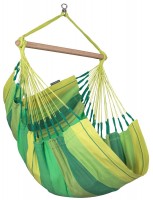 Organic Double Hammock with spreader bars...
For a few relaxing hours in your garden, there is nothing better than a hammock. The spreader-bar hammock Florencia has an extra-wide lying surface of 160 centimetres in a very stylish pattern. Made of high-quality organic cotton, it is...
€149.90 * 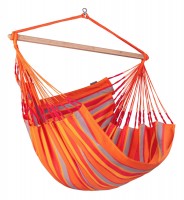 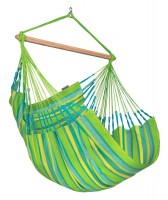 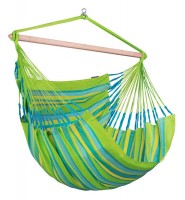 Hammock Chair Lounger Domingo Lime
Weather-resistant hammock chair Domingo Lime offers lots of room for refreshing relaxation under blue skies. It is extra-large, enabling you to not only sit comfortably, but also recline.The Domingo is made of weather-resistant,...
€149.90 * 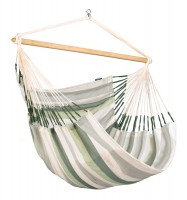 Hammock Chair Lounger Domingo Cedar
Weather-resistant hammock chair Domingo Cedar offers lots of room for refreshing relaxation under blue skies. It is extra-large, enabling you to not only sit comfortably, but also recline.The Domingo is made of weather-resistant,...
€149.90 *
1 From 11
Viewed
This website uses cookies, which are necessary for the technical operation of the website and are always set. Other cookies, which increase the usability of this website, serve for direct advertising or simplify interaction with other websites and social networks, will only be used with your consent. More information
Decline Configure